In its search for a new location and building, Frankfurt School of Finance & Management successfully created a bridge between a traditional building and a dynamic look into the future. The close cooperation between client, architect, and the team at Mosa led to a unique solution.

Complex task for architects
The Frankfurt School of Finance & Management features a long tradition: Having started out as the ‘Bankakademie’ (Banking Academy) seventy years ago, the Business School is now one of the most renowned universities for Banking, Finance, and Management in Germany. The Business School has been steadily growing over recent years, and the campus was becoming too small for the dynamic development. The new location was found on Adickesallee, a central location in the northern part of Frankfurt which formerly housed the Oberfinanzdirektion, the main regional financial government body. This old building featured a facade made of split tiles in different shades of red. The colours seemed to change depending on the light and the angle. At the end of 2014, this building was torn down. In an architectural competition, Henning Larsen architects from Copenhagen convinced by finding the proper link between old and new – and making the School ready for teaching and learning in the 21st century.

Calling card: the facade
The central element in combining the old building with the new one is the facade: ‘The facade is our calling card; it has a significant influence on the whole building. Our aim was to make it something very special – not too dark, not boring, but also being able to integrate into the surrounding and prolong the history of the building’, says Professor Dr Nils Stieglitz, the President of the school. Klaus Ringsleben, Building Director of the school, was highly involved in finding an appropriate solution. He contacted facade suppliers and material manufacturers during a trade fair in Munich. His task was to find the right supplier and the right material – and to focus on sustainability at the same time. ‘We’re aiming for Platinum certification for our campus, the highest possible level.’ For Ringsleben, the challenge was one of aesthetics, technical aspects, and financial considerations. During the fair in Munich, he also came across Mosa and began an intensive dialogue with the company. ‘What really convinced me about Mosa was the company’s history, its organic development, the wide range it offers, and its drive to achieve an architecturally-appealing solution,’ says Ringsleben.

Close cooperation for a common goal
The ideal solution for the Frankfurt School was achieved only thanks to the very close and efficient cooperation between everyone involved. The colour was a key factor in the design process. In consultation with Mosa, a unique tile colour was developed to echo the traditional red colours of the original building. Following several rounds of development and intensive dialogue between the architects, the team at the Frankfurt School, and Mosa, the result was the ‘Solids’ tile in terra tones with a size of 90 by 90 centimetres. Finally, three different shades of red tiles were chosen.

Such close cooperation between architect, client, and manufacturer is not a standard procedure. In the beginning, there was no manufacturer who could supply the tiles directly from their existing portfolio. Mosa took on the challenge and developed something entirely new.

Key factor: Sustainability
Lastly, besides design and the appropriate technology, the Frankfurt School always retained a strong focus on sustainability. The school relied on a certification consultant to gain its Platinum certification. With its Cradle to Cradle Silver certification, Mosa was able to rely on existing processes to fulfil all requirements. The standard procedures were used for the custom-made tiles, so the team at Mosa could fully concentrate on the design process and didn’t have to worry about different standards for raw materials or production processes. With this approach, Mosa was able to make a positive contribution to the Frankfurt School’s efforts in this area.

Nils Stieglitz is completely satisfied with the result of this project. ‘This new building is exactly what we hoped for: built on the foundations of our history and looking into a dynamic future. What more could I have hoped for?’

If you want to learn more about how the Frankfurt School created this unique result, please read the full story in Notes Magazine. 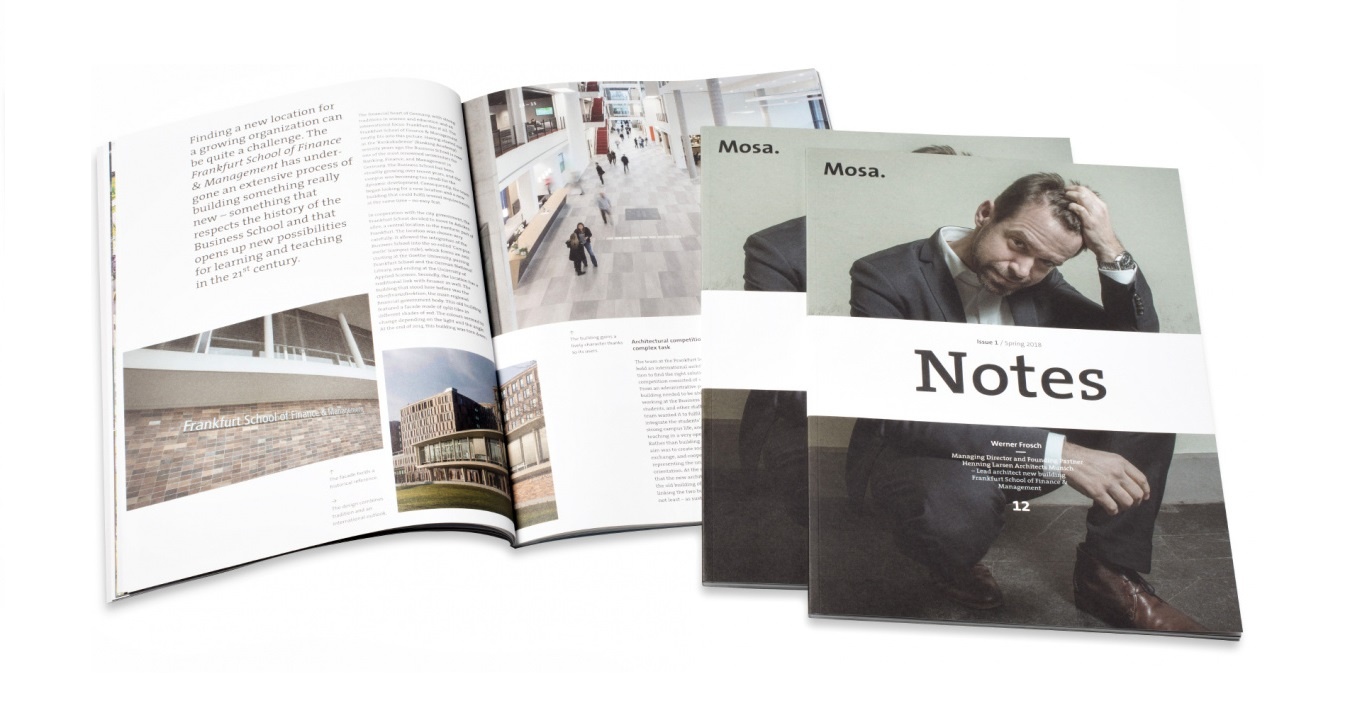 The next step towards a circular ceramic floor

Why do we need more circularity in the building industry?

Cradle to Cradle – just a certification?

How green building labels give orientation for sustainable buildings